“He is Just a Little Boy, and Not a Man Yet” 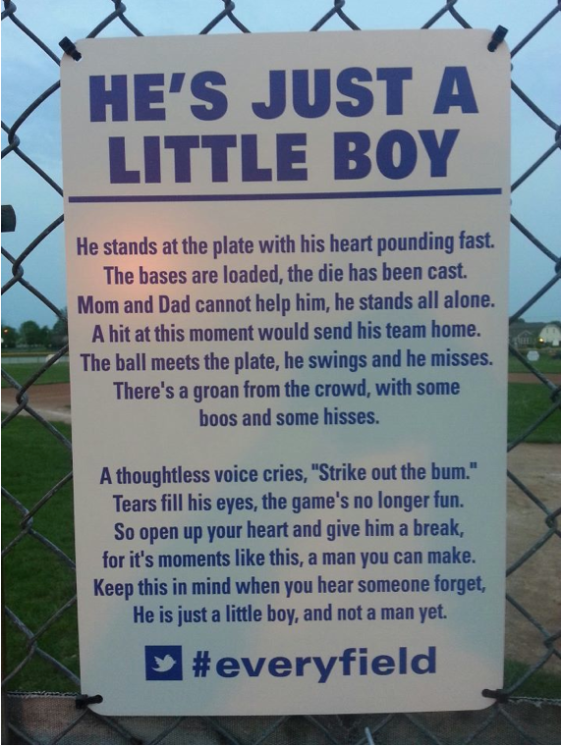 Joel McKinnon, who lives in Dover, Ohio, is the head of the Joel McKinnon Farmers Insurance Agency. In 2012, he noticed a poem by the late Chaplain Bob Fox that was being published and republished on Facebook. Mr. McKinnon liked the message: In sports such as Little League baseball, the emphasis should be on fun and doing your best, not on being overly competitive. Mr. McKinnon put the poem up on his agency’s Facebook page, and later the poem appeared on the Farmers Insurance corporate Facebook page. In both cases, the poem got many, many Likes. On his agency’s Facebook page, Mr. McKinnon wrote, “‘He’s Just a Little Boy’ a poem by the late Chaplain Bob Fox is a simple message that many of us tend to forget — and it’s a great reminder that we are all just kids ‘playing a game’ — That in life we can not always be winners, but sometimes we fail, sometimes we are not the winner, and the story book finish does not always take place.  What matters in life is how we handle these situations, and more importantly how we teach our children to handle them — I have always been a believer in positive reinforcement and trying to find the good in every situation — We may not believe it now, and it may seem easier to point the finger, but a pat on the back and a few ‘atta boy’s’ can make a huge difference in a child’s life.” Mr. McKinnon and Farmers Insurance decided to make 1,500 signs and send them out to communities that requested one. The signs are posted on fields where kids play sports games. This is the poem: “He stands at the plate with his heart pounding fast. / The bases are loaded, the die has been cast. / Mom and Dad cannot help him, he stands all alone. / A hit at this moment would send his team home. / The ball meets the plate, he swings and he misses. / There’s a groan from the crowd, with some boos and some hisses. / A thoughtless voice cries, ‘Strike out the bum.’ / Tears fill his eyes, the game’s no longer fun. / So open up your heart and give him a break, / for it’s moments like this, a man you can make. / Please keep this in mind when you hear someone forget, / He is just a little boy, and not a man yet.”

1 Response to “He is Just a Little Boy, and Not a Man Yet”