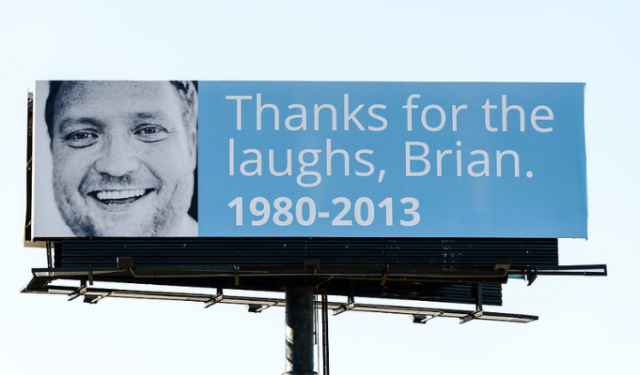 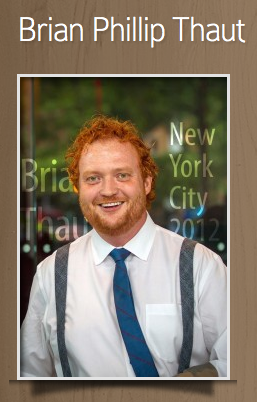 On 30 May 2013, Brian Thaut, age 32, of Salt Lake City, Utah, crashed while riding his motorcycle. He was not wearing a helmet when he hit a parked, unoccupied car, and he suffered traumatic brain injuries and lay in a coma before dying on 8 June 2013. He worked for Adobe, which put up on one of its billboards Mr. Thaut’s photograph and the message “Thanks for the laughs, Brian. 1980-2013.” Dan Pearce, who writes for the blog Single Dad Laughing, wrote, “Adobe has my respect for that, and I think when big companies do such incredible personal things without asking anything in return (they didn’t even put their name on it), they deserve a little shout-out. That’s all. May all big businesses, and the people who run them, be so thoughtful.”

Mr. Pearce, who was friends with Mr. Thaut, paid him this compliment: “He died young, but he died living.”

Don LaVange wrote on Flickr about Mr. Thaut, “He was an amazing, wonderful, kind, and fun guy. The world will be missing something essential, and so will our lives.”

Diana Freeman then emailed davidbruceblog this information on 15 December 2013:

“I am Brian’s Aunt. His mom is my sister and she told me.  She has talked with Chris himself as to when he is taking down the billboard.  He said that he just can’t bring himself to take it down so I don’t know how much longer it will stay up. Initially we thought It would be up until Brian’s birthday but that has come and gone. His birthday was 13 November. Then we thought maybe it would be 6 months after his death which would have been the 8th of December, but it still is up. Quite a tribute to our Brian. My husband and I are completing our LDS [Latter Day Saints] mission here in New Zealand and come home February 2014.

“I am so grateful that Brian chose to come spend his 3 week vacation with us here in New Zealand (plus 1 week in Fiji) a month before his accident. It was an amazing 3 weeks having Brian all to ourselves. He was larger than life and always a legend in our family. I was fortunate to come home and be with him and family that last week in the hospital and then attend his funeral.

“His legend lives on and maybe when I return home in February I will still see that billboard is still up.

“I know that Brian was being approached to come work for Domo and leave Adobe which he was seriously considering while he was here with us in New Zealand. Who know what he was deciding.  But he was well respected by the folks at Domo.”

This is Brian Thaut’s obituary as posted on the Walker Funeral Home website:

“Brian Phillip Thaut passed from this life on June 8, 2013.  He was born November 13th, 1980 to Phillip and Allison Thaut, in Provo, Utah. Brian truly was larger than life.  Brian always saw the world through ginger eyes could stop crowds (often eliciting requests to rub his head for good luck), and a personality that enveloped you with pure happiness. Brian was loved by all.

“Life with Brian was infectious, as he never had a moment to waste, always having something to do or see and it almost certainly revolved around entertaining a loved one.  More than the life of the party, Brian owned audiences wherever he went.  At the age of 18, Brian secured employment with ViewPoint Digital.  His resume was more than a bit exaggerated, however Brian always rose to the occasion and within a few months was commanding an executive position with Computer Associates.

“At 20, Brian walked away from his immense success to serve a mission for the LDS church; his charm, love, and dashing good looks were immediately appreciated by the wonderful people of Sao Paulo, Brazil.  Brian also developed a close friendship with a mission companion, of whom he declared was ‘destined to marry his sister’, and true to his prediction, eventually became his brother-in-law.

“Brian spent his remaining years building a successful career with Omniture and later Adobe as a company evangelist.  Brian flew millions of miles forging strong friendships in almost every corner of the world.

“As for his family, Brian will be remembered as a most beloved son, brother, and best friend.  And certainly, without any question, the greatest uncle a child might ever hope for.  Brian is a bright ‘shooting-star’, who has accomplished more in the short 32 years we have had him, than most might accomplish in a lifetime.  He is so very loved and will never be forgotten.

“Brian is survived by his parents, Phillip and Allison Thaut; his siblings, Stephen and Melissa Thaut, Jessica and Aaron Grimmer, and youngest brother, George.  Brian especially loved his darling nieces and nephews: Josephine, Max, Madeleine, and Jameson.  He leaves behind many cousins and Aunts and Uncles and his beloved bulldog, Sally.”

“A tribute to my brother Brian who passed away in June from a motorcycle accident. We were able to add his uproarious laughter at the end from a previous video. PLEASE share this, the advertising allows us to fund these tributes, and we would love to be able to make them bigger each year. Thank You!!! This was a follow up from a previous video posted on my channel.” — TheBoneyKing78 (Brian’s brother)

“I uploaded this in July of 2011. My brothers and I were in Evanston, and my younger brother Brian dropped about 750 bucks to give us this show. Ever the go big or go home kid that he was, he loved to make an entrance. My brother Brian passed away at 32 years old yesterday from a motorcycle accident. Up until [the day before Brian passed] I had a total of 130 hits on this video and it’s way too much of a coincidence that it went viral the day that he passed. We always talked about throwing videos up on YouTube to try and fund our exploits and I am certain that he is telling me that everything is ok. As stupid as it may sound, you watching and sharing this dumb little video has given me hope in one of the darkest times of my life. Thank you!” — TheBoneyKing78, Brian’s brother

93 cougar recommends that if you are on Facebook, you should check out the great tributes on the Brian Get Well page:

93 cougar wrote, “Brian was my neighbor a few years back. Good guy. It was a tragedy to lose him so early. I thought the billboard was a class act.”

Source: 93 cougar, “If you want to read some great tributes to him check out this facebook page.” COUGARBOARD.com. 5 August 2013

Check Out “Thanks for the Laughs”

For Further Information, Don LaVange, “In My Memory of Brian Thaut.” 14 June 2013