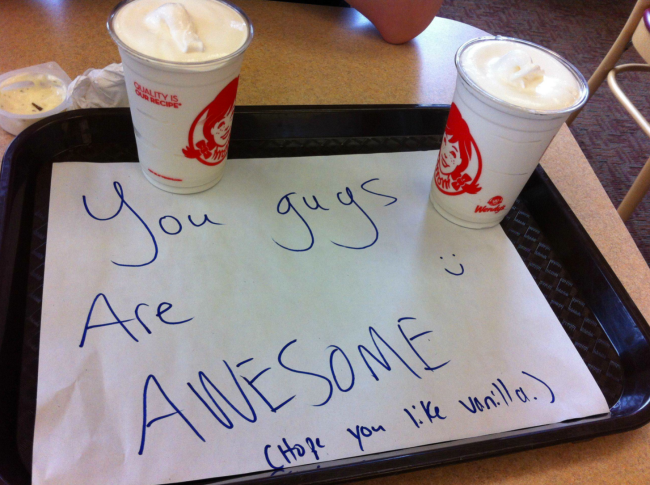 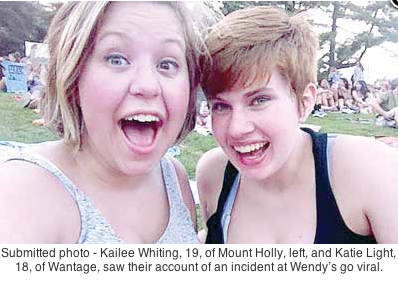 In July 2013, a couple of New Jersey teens heard an employee at Wendy’s being bullied by a customer. They stood up for her, and the employee rewarded them with free chicken nuggets and free Frosties. Kailee Whiting, age 19, wrote on Reddit, “Stood up for an innocent employee at Wendy’s who was being bullied by a customer. She gave us free frosties and chicken nuggets.” She also posted on Imgur a photo of the two Frosties sitting on a tray on a piece of paper that read, “You guys are AWESOME. (Hope you like vanilla.)” Ms. Whiting’s Reddit name is Butchplease. Her girlfriend, 18-year-old Katie Light, said, “I thought it was really sweet of the cashier. It was nice to know that she was happy that we stood up for her. Karma gave us something back.” Butchplease commented on Reddit, “A woman in front of my girlfriend and I started yelling at the innocent eighteen-year-old girl who was having an issue with her cash register. The girl stood there as the woman complained and complained about the lack of service and how awful the girl was at her job. I butted in telling her that, ‘she’s just doing her job and if you took the stick out of your ass and spent one day in either a food service job or retail you would understand the difficulties,’ she proceeded to shove her hand in my face and yell, ‘SHUT UP. YOU SHUT UP NOW.’ I did quiet down after laughing at her and her immaturity and the girl behind the counter ended up giving me a free pack of chicken nuggets. After about twenty minutes of [us] eating, the cashier came out with the tray and frosties. Wendy’s is now my favorite fast food place.” She also commented, “I work in retail and as a hostess/cashier at a diner and while it’s not the same as fast food we get a lot of jerks too. This girl looked on the verge of tears so I had to say something. I’ve been in the situation where a woman has had me crying on f[**]king CHRISTMAS EVE ’cause I couldn’t get her the right pair of jeans. And while it is the manager’s responsibility, he was nowhere to be seen. The young girl was floundering and I knew that feeling and I had to say something. I don’t regret my decision at all ’cause I know I made her day. As my girlfriend and I were leaving, a crew member was outside on their break and she even thanked us, told us that we were awesome, and wished that there were more people like us who came around.” Ms. Light said, “If you want the world to be a good place, you have to make it a good place.” By the way, the customer told on the employee for giving away free food, but the manager did not mind. Also by the way, wheezinthejuice commented, “I did this recently at Maccas [Australian for McDonald’s]. There was a short, fat George Costanza looking motherfucker REAMING out some poor 16-year-old girl over not being able to design his own value meal, or some shit. All I said was, ‘Do you want to ease up a bit there, mate?’ He turned around to have a go at me, saw a tall bearded man with 40 hours of tattoos on his arms and instantly piped down. Got a free lunch out of it!”

For Further Information: Butchplease, “Stood up for an innocent employee at Wendy’s who was being bullied by a customer. She gave us free frosties and chicken nuggets.” Reddit Comments. 29 July 2013

For Further Information: Butchplease, “Stood up for an innocent employee at Wendy’s who was being bullied by a customer. She gave us free frosties and chicken nuggets.” Imgur. 29 July 2013