“Michelle Got Two Steps Out the Door and Yelled Out ‘Snake’” 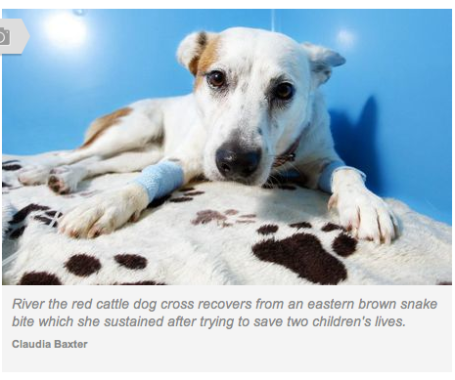 On 14 January 2012 in Coalsfalls, a suburb of Ipswich, Queensland, Australia, River the 18-month-old red cattle dog killed a poisonous eastern brown snake that was a danger to Catherine Lynch’s two young daughters: Michelle, age seven, and Kaylee, age two. Ms. Lynch said, “They were going out to play on the swings and Michelle got two steps out the door and yelled out, ‘Snake.’ As soon as she yelled, the dog bolted out, grabbed the snake, and killed it. I think it was probably Michelle’s tone of voice, River picked up that something wasn’t right and she didn’t hesitate.” She added, “It happened in our front yard as we were doing a bit of gardening and the kids were going outside to play. The dog shot out and jumped in front of the snake before it could get to the kids. The heat must have stirred up the snake. It was a juvenile one about 70cm long. We took it along to the vets so they could identify it and give River the right treatment. My partner [Ben] and I are very grateful the dog got in first because it could have been a lot worse. In my opinion, River probably saved their lives.”