“I was Shocked Because He has been Wanting that Forever, and Then for Him — It’s Something Valuable — to be Okay with Giving It Up, To Make Someone Else Happy, You Know, So that was a Really Proud Moment. I was in Tears”

Posted on September 4, 2013 by davidbruceblog 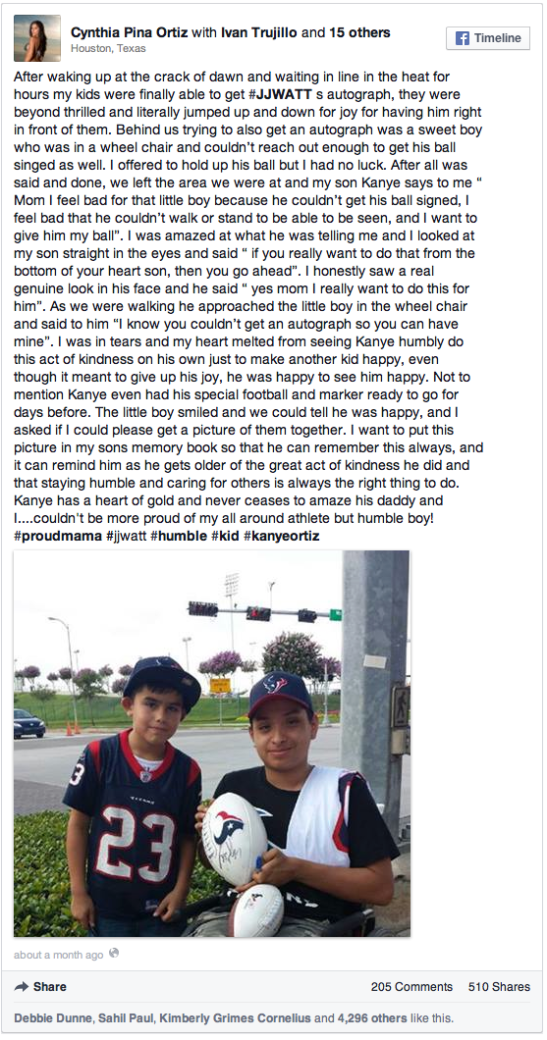 Lots of boys who are football fans want to get the autograph of Justin James “J.J.” Watt, defensive end of the NFL Houston Texans. In early August, 2013, Kanye Ortiz, the nine-year-old quarterback for the South Houston Wildcats who jokes that he likes football because in games you can “hit someone without getting in trouble,” got J.J.’s autograph following a Houston Texans open practice. Kanye said, “We were waiting forever to get his autograph, and then he finally came around, and I was like, ‘Yes!’” Unfortunately, another young fan did not get J.J.’s autograph: 15-year-old Zuriel Sanchez, who is in a wheelchair because he suffers from spina bifida. Kanye said, “Mom, I want to give this to the boy in the wheelchair.” His mother, Cynthia Pina Ortiz, took a photograph as Kanye gave his precious football away. Ms. Ortiz said, “You know, I was shocked because he has been wanting that forever, and then for him — it’s something valuable — to be okay with giving it up, to make someone else happy, you know, so that was a really proud moment. I was in tears.” She added, “To me, it was a really proud moment as a mother, to see my son doing that from the bottom of his heart. And I didn’t have anything to do with it. He just did it.” Zuriel, who has placed the football in a display case, said, “You know, when I was going home, Kanye came up to me and told me he wanted to give me his football, and I felt excited because no one had ever, like, done that to me.” Zuriel’s sister, Andrea Sanchez, said, “It’s gonna be special to him. Every time someone sees that ball, they’re going to ask him. It’s always gonna be that story behind it until he grows older.” Kanye said, “If you do something nice for someone, it will help you later on, and it will help you later on in life.” He added that “if you be nice and generous, God will bless you for that.”