Batman and Captain America to the Rescue!

Posted on September 9, 2013 by davidbruceblog 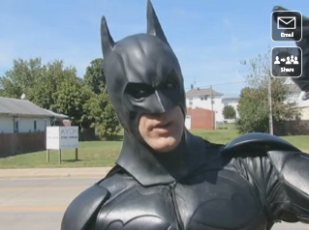 On 7 September 2013, fire raged through a home in Milton, Cabell County, West Virginia. When firefighters arrived, they discovered that two superheroes had gotten there first: Batman and Captain America. The two superheroes are actually John Buckland and Troy Marcum, both of whom were in costume to teach children positive lessons at a nearby American Legion Post. The two superheroes went to the house to see if anyone was inside. Fortunately, no one was, but they rescued the family’s pet cat. Mr. Buckland used to be a firefighter and was stationed in Iraq before starting his “Hero 4 Higher” business. Mr. Buckland said, “He [Captain America] breaks out the window. The smokes lets out, and as I can start to see I reach down and grab something furry!” He then resuscitated the cat, which was not especially happy to see Batman. Mr. Buckland said, “The cat comes around, takes a look at me, then hissed!” Tom Cantaberry, who was at the Legion Post, witnessed the rescue. Mr. Cantaberry said, “He did a great job. It was complete chaos!”