A Bad Deed and a Good Deed

Posted on September 17, 2013 by davidbruceblog 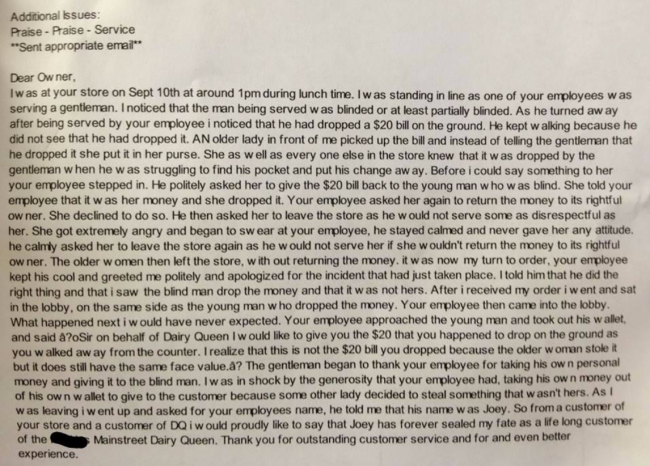 “I was at your store on Sept 10th at around 1pm during lunch time. I was standing in line as one of your employees was serving a gentleman. I noticed that the man being served was blinded or at least partially blinded. As he turned away after being served by your employee i noticed that he had dropped a $20 bill on the ground. He kept walking because he did not see that he had dropped it. AN older lady in front of me picked up the bill and instead of telling the gentleman that he dropped it she put it in her purse. She as well as every one else in the store knew that it was dropped by the gentleman when he was struggling to find his pocket and put his change away. Before i could say something to her your employee stepped in. He politely asked her to give the $20 bill to the young man who was blind. She told your employee that it was her money and she dropped it. Your employee asked her again to return the money to its rightful owner. She declined to do so. He then asked her to leave the store as he would not serve some as disrespectful as her. She got extremely angry and began to swear at your employee, he stayed calmed and never gave her any attitude. He calmly asked her to leave the store again as he would not serve her if she wouldn’t return the money to its rightful owner. The older women then left the store, without returning the money. It was now my turn to order, your employee kept his cool and greeted me politely and apologized for the incident that had just taken place. I told him that he did the right thing and that i saw the blind man drop the money and that it was not hers. After i received my order i went and sat in the lobby, on the same side as the young man who dropped the money. Your employee then came into the lobby. What happened next i would have never expected. Your employee approached the young man and took out his wallet, and said å?oSir on behalf of Dairy Queen I would like to give you the $20 that you happened to drop on the ground as you walked away from the counter. I realize that this is not the $20 bill you dropped because the older woman stole it but it does have the same face value.å? The gentleman began to thank your employee for taking his own personal money and giving it to the blind man. I was in shock by the generosity that your employee had, taking his own money out of his own wallet to give to the customer because some other lady decided to steal something that wasn’t hers. As I was leaving I went up and asked for your employees name, he told me that his name was Joey.  So from a customer of your store and a customer of DQ i would proudly like to say that Joey has forever sealed my fate as a life long customer of the […] Mainstreet Dairy Queen]. Thank you for outstanding customer service and for and even better experience.”

Joey’s last name is Prusak, and many reporters interviewed him after the email detailing his Good Samaritan action went viral. Mr. Prusak said, “The owner [of the Dairy Queen] asked why I didn’t tell him. I said I didn’t think I needed to. I didn’t think I needed to tell anyone, and I didn’t tell anyone.” The customer whose $20 Mr. Prusak replaced was a regular customer at the Dairy Queen. Mr. Prusak said, “He always pays with a debit card. I don’t know if he is partially blind or fully blind or what the situation is.” When the blind customer dropped a $20 bill and an older woman picked it up, Mr. Prusak asked her to return the money to its rightful owner, but the older woman refused. Mr. Prusak said, “I was like, ‘If you are not going to return the money, please leave the store. She said, ‘It’s mine.’ I said, ‘Please leave the store.’” Mr. Prusak’s boss, Nancy Pettit, posted the anonymous email praising Mr. Prusak so that all her employees could read it. The email went viral after someone posted a photograph of it on Facebook. Ms. Pettit said, “It’s nice to see a young man do the right thing and get recognized for it. I just feel very blessed to have such a wonderful young man working at my shop.”

For Further Information: Happy_Penguin, “A friend posted this today, picture taken at his local DQ, it really put a smile on my face 🙂.” Imgur. 16 September 2013

For Further Information: Happy_Penguin, “A friend posted this today, picture taken at his local DQ, it really put a smile on my face 🙂.” Reddit. 16 September 2013