LEGO is Generous to Luka

Posted on October 2, 2013 by davidbruceblog 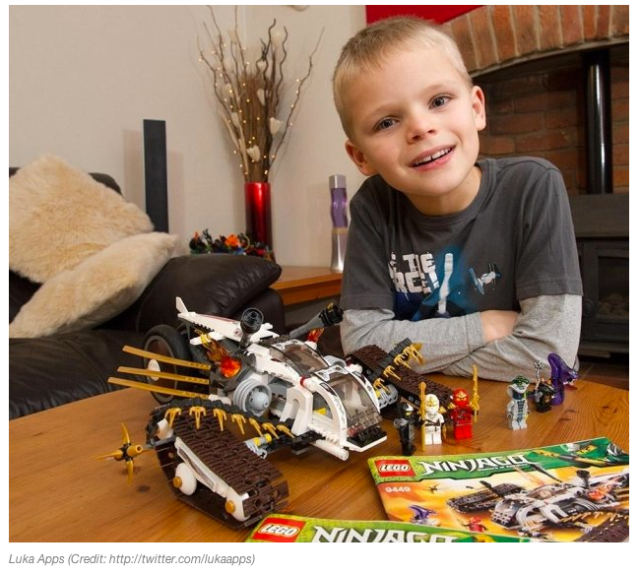 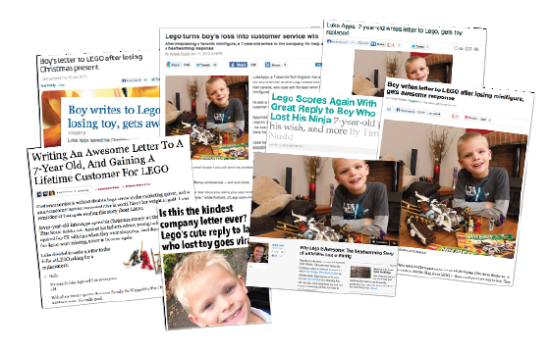 Seven-year-old Luka Apps knew exactly how he wanted to spend his Christmas money — he wanted to buy the LEGO Ninjago Ultra Sonic Raider set. Unfortunately, after making the purchase, young Luka made an unwise decision — he took one of his new toy figurines — Jay ZX — on a shopping trip. Why is this unwise? Because it fell out of his pocket and he lost it. Luka then decided to write LEGO confessing his mistake and asking for a replacement out of the kindness of LEGO’s heart. This is his letter:

My name is Luka Apps and I am seven years old.

With all my money I got for Christmas I bought the Ninjago kit of the Ultrasonic Raider. The number is 9449. It is really good.

My Daddy just took me to Sainsburys and told me to leave the people at home but I took them and I lost Jay ZX at the shop as it fell out of my coat.

I am really upset I have lost him. Daddy said to send you a email to see if you will send me another one.

I promise I won’t take him to the shop again if you can.

Luka quickly received a reply from a LEGO customer service representative named Richard, who wrote that he had spoken to Sensei Wu, a master from the Ninjago line:

Luka, I told Sensei Wu that losing your Jay minifigure was purely an accident and that you would never ever ever let it happen ever again.

He told me to tell you, “Luka, your father seems like a very wise man. You must always protect your Ninjago minifigures like the dragons protect the Weapons of Spinjitzu!”

Sensei Wu also told me it was okay if I sent you a new Jay and told me it would be okay if I included something extra for you because anyone that saves their Christmas money to buy the Ultrasonic Raider must be a really big Ninjago fan.

So, I hope you enjoy your Jay minifigure with all his weapons. You will actually have the only Jay minifigure that combines 3 different Jays into one! I am also going to send you a bad guy for him to fight!

Just remember, what Sensei Wu said: keep your minifigures protected like the Weapons of Spinjitzu! And of course, always listen to your dad.

Thank you for talking to Sensei Wu for me.

I promise I will look after them.

We were all really impressed with the reply from Richard at @lego_group. He definitely deserves a pat on the back.