Posted on October 12, 2013 by davidbruceblog 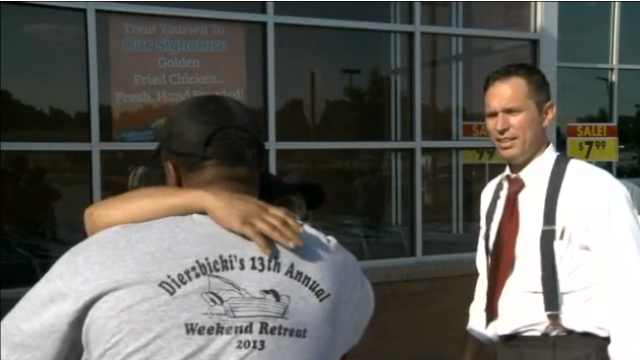 Source (The anonymous Good Samaritan is wearing the Weekend Retreat T-shirt; a Schnucks female employee is hugging him):

In July 2013, two men saw a little over a thousand dollars blowing in the wind at a Schnucks grocery store in Jennings, Missouri. One man turned in the money he had collected; the other man ran away with the money he had collected. An elderly woman had lost the money; she was identified by an insurance card that she had lost with the money. The Good Samaritan, an African-American man who did not want to be identified, said, “I walk out this door and I look on the ground and there’s like money lying right there … you could tell it was a bunch of money because it was like 100’s, 20’s, 50’s.” He collected $640 and the insurance card. He added that he and the other man argued about what to do with the money. The Good Samaritan said, “I was like, ‘Wow, that’s a lot of money for somebody to be losing.’ Then, for another guy to run off with it after we got into an altercation … he wasn’t going to give the money back. He said I was a fool. I said that’s wrong.” Customer Lamonda Davis, an eyewitness, remembered that people were saying, “Man, you should have seen all that money. I can’t believe he turned it in!’” She added, “That’s the right thing to do. If it was me, I would have turned it in.” Customer Dana Moorehead said about the Good Samaritan, “Yes, he is a hero. Times are hard right now.” On television, people urged the other man to turn in the money he had collected. Customer Rudy Brafford said, “It’s never too late. It depends on what kind of conscience he has, if he has a conscience.” Ms. Davis said, “It’s not too late. He should bring it back and turn it in.” The Good Samaritan said, “I hope he’s looking right now, at TV, the news, to bring that other portion back up here to that woman. I feel good, man. I feel good. It’s a good deed, man.” According to a Schnucks spokesperson, two people falsely claimed that the money belonged to them.