“I Told Him That I’d Ring a Taxi for Both of Us, But He Said He Only had Enough Money for the Bus — I Said, ‘Don’t Worry About That’”

Posted on October 17, 2013 by davidbruceblog 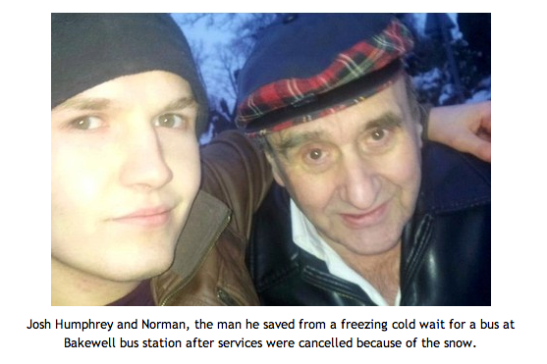 On 28 March 2013, bad weather forced the cancellation of public buses in Derby, Derbyshire, England. Not everyone, unfortunately, got word that the public bus system had been shut down. Josh Humphrey, age 20, waited for the Transpeak bus at Bakewell bus station. As he waited, an elderly man named Norman asked him whether the public buses were still running — Norman said that he had been waiting for a long time. They waited another two hours, then Josh noticed that Norman was shivering. Josh said, “It was horrible to see — he must have been in his mid-seventies. I told him that I’d ring a taxi for both of us, but he said he only had enough money for the bus — I said, ‘Don’t worry about that.’” Norman was happy when the taxi showed up. Josh said, “He was really happy — it was such a great feeling. When we got to his house, I got out to say goodbye and he just hugged me — I felt like crying!” Josh, who lives in Matlock, paid £25 to help Norman get to his home in Darley Dale.