“I’ll Forgive You Right Now, and I’ll Even Take You to the Front and Pay for Your Groceries”

Posted on October 27, 2013 by davidbruceblog 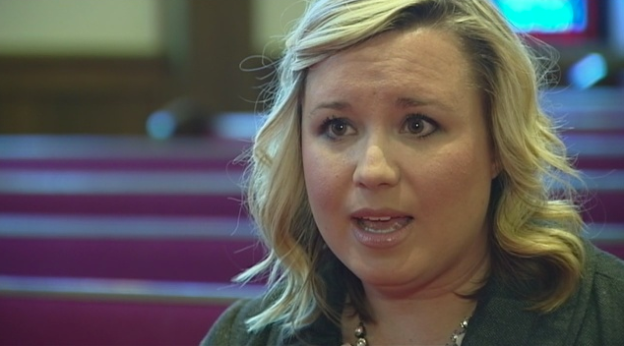 Source of Photo of Jessica Eaves:

In October 2013, a man stole the wallet of Jessica Eaves, the leader of the Christian outreach team at First Christian Church in Guthrie, Oklahoma, while she was shopping. She said, “I saw this gentleman down the aisle from me. He walked behind me, and when I got a couple of aisles over, I realized my wallet was gone.” She then searched for the man: “I spotted him in a crowded aisle and approached him. I said to him, ‘I think you have something of mine. I’m gonna give you a choice. You can either give me my wallet and I’ll forgive you right now, and I’ll even take you to the front and pay for your groceries.’” She told the man that if he did not give her back her wallet, she would call the police. She said, “He reached into his hoodie pocket and gave me my wallet.” The man showed remorse: “He started crying when we walked up to the front. He said he was sorry about 20 times by the time we went from the pickle aisle to the front. He told me he was desperate.” Ms. Eaves spent $27 buying groceries such as bologna, bread, cheese, crackers, milk, and soup. The man told her, “I’ll never forget tonight. I’m broke, I have kids, I’m embarrassed, and I’m sorry.” Ms. Eaves and her family have been hurt by bad economic times: “My husband recently took a position for a company making half of what he was making before. I am a full-time college student. We got married young. We have four children under the age of eight. For the last two weeks the check engine light has been on in my car. And this morning my husband went out to get in his pick-up and it didn’t start.” She added, “Regardless of how much money we have we should always be willing to help someone in need because there is always someone who is in greater need than we are.” Ms. Eaves believes that God wanted her to help the man: “I never carry cash. When I got to the check-out counter that day his [the thief’s] total was just a little over $27 and I had $28 in cash in my wallet. And so I knew in that moment it wasn’t me. It was Christ that played in that moment.”

For Further Information: Leonardo Blair, “You Won’t Believe What This Christian Woman Did After a Man Stole Her Wallet and Why?” Christian Post. 24 October 2013