“Most Kids Would have Sat There Until Their Parent Woke Up. She Took the Initiative to Run Out Even Though It was Dark”

Posted on October 28, 2013 by davidbruceblog 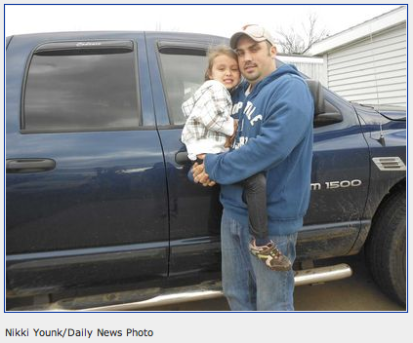 On 22 October 2013, former volunteer firefighter Chris Lucas hit his head and knocked himself out while unloading scrap metal from his truck in the Hamilton Lakes area of Iron Mountain, Michigan. Fortunately, he had a hero with him: his four-year-old daughter, Cadence Lucas. He said, “I got out of the truck to take the stuff out, and I think I dropped something underneath the tailgate. After that, I don’t really remember what happened.” Cadence ran a quarter-mile to a neighbor’s house to get help for him. The neighbor aided Mr. Lucas and called an ambulance. Mr. Lucas said about his daughter, “Most kids would have sat there until their parent woke up. She took the initiative to run out even though it was dark.” He added, “She knows the property, and she told me she had seen headlights in the neighbor’s yard. That’s probably why she went over there.” Mr. Evans suffered a concussion, and he spent the night in a hospital. He encourages parents to talk to their children about what to do in emergencies. He said, “We work with her on 911, and she knows our names and phone numbers. I thought it was kind of cool she remembered that.”