Sneak Along and Do Good Deeds

Posted on November 14, 2013 by davidbruceblog 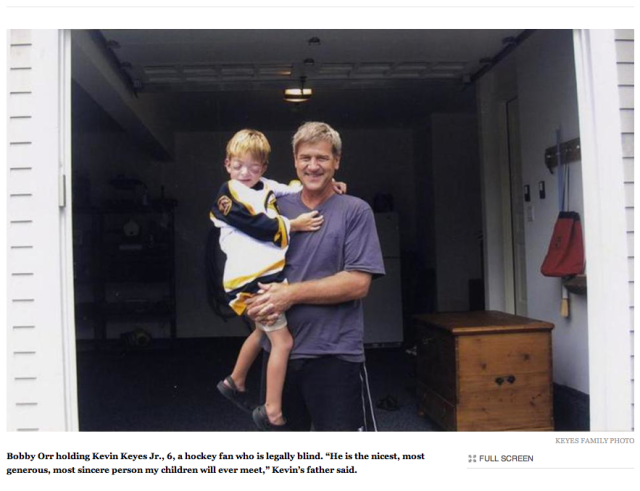 Retired hockey superstar Bobby Orr does not write much about his many good deeds in his autobiography, Orr: My Story, but Boston Globe (Massachusetts) reporter Bob Hohler wrote about them in his 29 September 2013 article titled “At 65, Bobby Orr is focused on doing good — quietly.” For example:

• Kevin Keyes just barely knew Bobby Orr, who won the Stanley Cup with the Boston Bruins in 1970 and 1972, but Mr. Orr invited him and his four children to visit him in his home. Mr. Keyes knocked at the front door, but no one answered. Then he knocked at the side door, but no one answered. Mr. Keyes was greatly disappointed, and he told his kids to get in the car. Just then, Mr. Orr showed up. He had been stretching in the back yard, and he heard noise out front. Mr. Orr said to the children, “Everybody huddle up. We’re going to have a good time, but I want you to promise me one thing first. Promise me you won’t tell your mother that your father brought you a day early. You were supposed to be here tomorrow.” He then spent hours with the children, including six-year-old hockey-fan Kevin Keyes Jr., who is legally blind. Mr. Keyes said, “The greatest hockey player in the world, knowing he would get no recognition for it, took an interest in a bricklayer’s son who needed a ray of sunshine in his life. He is the nicest, most generous, most sincere person my children will ever meet. He changed our lives.”

• Mr. Orr helped rescue a former Bruin teammate from alcohol and drug addiction. Mr. Orr himself usually limited himself to two drinks per party (before he gave up alcohol), and he helped his teammates to control their drinking. Bruins teammate Derek Sanderson said, “A lot of us didn’t know how to behave at that age. It was easy to get stupid. Bobby felt very strongly about how you should act. It came to him naturally, but he had to help us. He would say, ‘Derek, would you shut your mouth?’” In the late 1970s, Mr. Orr discovered that Mr. Sanderson was addicted to alcohol and drugs and helped him clean up. Mr. Orr took him to detox, and each time Mr. Sanderson relapsed, he took him again to detox. Mr. Orr paid all the detox bills. Mr. Sanderson, sober since 1980, said, “He helped save me. Bobby knew it wasn’t going to be an easy process, and he never gave up. He was always there.” Mr. Sanderson now has a career as a financial advisor.

• In 1986, social studies teacher Christa McAuliffe died aboard the space shuttle Challenger. Her family members were Bruins fans, and he visited them in Concord, New Hampshire.

• In 1976, Dr. Murray Feingold, a research physician, asked Mr. Orr to visit a seriously ill boy. Mr. Orr agreed to visit the boy in a hospital in Boston on one condition: the visit must remain secret. Mr. Orr visited the boy, but when he left the boy, reporters surrounded Mr. Orr, who glared at Dr. Feingold, who said, “Oh my God, Bobby, I had nothing to do with this!” It turned out that the ill boy’s mother had alerted the media.

• In 1995, Mr. Orr turned his house into a Hospice for former Bruins trainer John “Frosty” Forristall, who was dying of brain cancer. Mr. Orr had roomed for several years with Mr. Forristall, who helped him rehab from his injuries. In 1970, Mr. Orr scored the goal that won the Stanley Cup for the Bruins. As a gift, Mr. Forristall had Mr. Orr’s skates bronzed. They are now in the Orr exhibit at the Hockey Hall of Fame in Toronto, Ontario, Canada, along with a bronze plaque inscribed with Mr. Forristall’s words: “May you be as proud and happy always as we were on May 10, 1970, when you unlaced these skates.” When Mr. Forristall became ill, he had little money. Mr. Orr cared for him until he died at age 51. Bill Forristall, Frosty’s brother, said, “Bobby knows how to spell the word ‘humble.’ He was very good to my brother.”

• One of the victims of the 11 September 2001 terrorist attacks was former Bruin Ace Bailey, who died aboard one of the hijacked airliners that struck New York’s World Trade Center. Mr. Orr visited Mr. Bailey’s widow, Katherine, the following day. Mrs. Bailey said, “Bobby will always have a place in my heart.”

• In 2012, Mr. Orr learned that James Gordon, a hockey player at Hingham High School in Hingham, Massachusetts, was fighting testicular cancer, so he arranged with James’ mother to visit him. He spent several hours talking to James, and he posed for photographs. After the visit, he sent individualized autographs to all the members of the family. Terry Gordon, James’ awed mother, said months later, “Who does that?”

• In 1973, after the Bruins were eliminated from the playoffs, Mr. Orr helped his teammates to “kidnap” Phil Esposito, an injured teammate, from Massachusetts General Hospital so he could attend the after-game party.

• Travis Roy, a freshman at Boston University, became paralyzed after an accident in his first collegiate hockey game. He was in a coma for a month, and when he woke up, he discovered Mr. Orr by his bed. Mr. Roy said, “I remember Bobby sitting there and softly saying to me that everything was going to be OK. There was something about hearing it from him that was different from hearing it from everybody else. You just kind of believed him. You felt like he knew.” Mr. Orr visited Mr. Roy several times and has raised tens of thousands of dollars help spinal cord patients.

• Robin Young, a popular television news personality, once was afraid that Mr. Orr, a married man, was going to hit on her. They had been on a flight together, and afterward, when she left her hotel to take a walk, Mr. Orr saw her and joined her. Ms. Young said, “I’m thinking, ‘Oh, God, what’s going on here?’ I always thought of Bobby as a gentleman, happily married, the golden boy. I’m thinking, ‘Please don’t disappoint me.’” She was uncomfortable, but Mr. Orr did not hit on her, and after the walk was over, Mr. Orr said, “Listen, Robin, you’re a young, lovely woman. Please tell me you’re not going to walk alone by yourself again after dark. Good night.’” Ms. Young, who now cohosts NPR’s Here and Now, said, “Bobby really is the golden boy. That’s what Bobby does.”

• In 2012, a convenience store, Hillcrest Grocery, burned down in Parry Sound, Ontario, Canada. Mr. Orr had shopped there when he was a kid. He donated an autographed picture of “The Goal” — the goal he had scored that won the Bruins the Stanley Cup in 1970 — to help in a fundraising effort. The store’s co-owner, Sue Bye, said, “Bobby is beloved in Parry Sound.”

• Even as a teenager, Mr. Orr was a good person. Jim Cuthbertson, his science teacher in Oshawa, Ontario, Canada, said, “I remember two things about Bobby. He always arrived with his homework done, even after long hockey trips. And he shared a lab desk with a real jerk.” Bobby was a good influence on his lab classmate. Mr. Cuthbertson said that Bobby was “a controlling influence, illustrating by example how the kid should act.”

Mr. Orr does not talk much about his many good deeds: “I don’t do things to get ink. I just sneak along and do my thing and meet wonderful people, some people I’ve never met, new friends.” His mother, Arva Orr, taught him well. When Mr. Orr was internationally famous, reporter Parry Sound told Arva that he wished to interview her son. She replied, “Which one? I have three, you know.”