Posted on December 11, 2013 by davidbruceblog 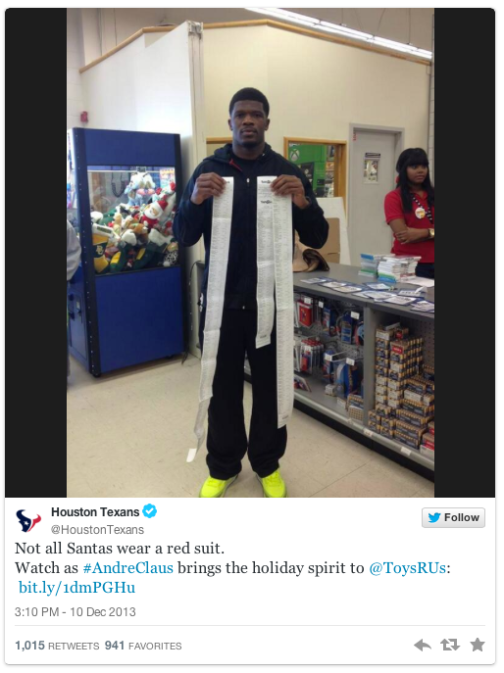 In December 2013, Houston Texans receiver Andre Johnson held his seventh annual Toys “R” Us shopping spree for 12 at-risk children in Houston, Texas. Each of the 12 children now lives with an extended family member after suffering through some sort of parental abuse. The children grabbed as many toys as they could in 80 seconds. (Mr. Johnson wears number 80 on his football jersey.) A glass retail display case with high-priced  gaming systems was at Toys “R” Us, but the children did not have to wait for a clerk to unlock it. Mr. Johnson gave each of the 12 children an Xbox 360 and two games. How much was the tab for all the toys? $17,352. “It just gives them a chance to go through the store and get whatever they want,” Mr. Johnson said. “They don’t have to ask nobody for it. Whatever they have on their Christmas list, they can pick-up, so that’s the reason why I do it. It’s fun. It’s fun for the kids. It’s fun for me. It’s something I enjoy seeing every year. I just figure why not keep doing it.” He added, “It’s the holiday season. It’s a time for giving. People that know me know I have a big heart. I just like to give back and help people out.”

For some stories of good deeds and anecdotes and cosplay, check out the rest of