Posted on December 28, 2013 by davidbruceblog 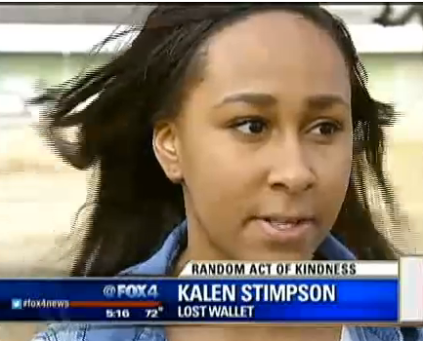 In December 2013, Kalen Stimpson, a senior at Cedar Hill High School in Cedar Hill, Texas, lost her pink wallet. It contained a paycheck debit card with over $300 on it and such sentimental items as a $2 bill, a gift about which Ms. Stimpson said, “I got it on my 14th birthday and I haven’t spent it. I just keep it.” When she realized that she had lost her wallet, she worried about Christmas: “I was like, ‘Oh! I can’t get anybody Christmas gifts. I can’t because all my money was in there. I don’t know how I’m going to get my parents, or friends or anybody anything.’ I was just really upset about it.” Kewpie Steward, a senior at Ferris High School in Ferris, Texas, found the wallet. She said, “I was just going with my boyfriend to get his hair cut and I dropped him off and parked the car. It [the wallet] was just lying right by my door.” Ms. Stewart spent $6 of her own money to return the wallet, mailing it — and a note — to an address she found inside the wallet. She said, “I looked at her birthday and said, ‘Hey, she’s a month younger than me! Man, I know how she’s feeling.” Ms. Stimpson said, “I wish I could just grab her right now and hug her because she really went out of her way.” Ms. Stimpson’s mother wrote about the good deed on Facebook.

For some stories of good deeds and anecdotes and cosplay, check out the rest of https://davidbruceblog.wordpress.com/