“It was Just a Lucky Day to be the Register Girl” 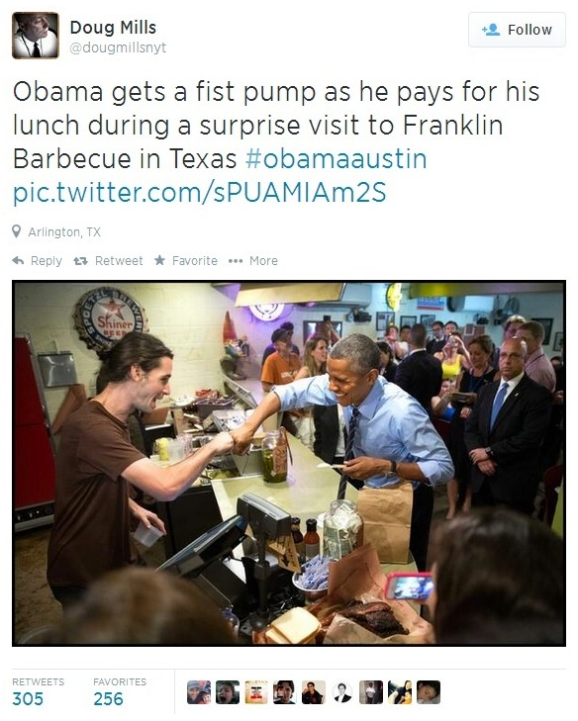 On 10 July 2014, President Barack Obama visited Franklin Barbecue in Austin, Texas, where Daniel Rugg Webb, a comedian, artist, musician, and part-time Franklin Barbecue employee took time to lobby the President for gay rights. As President Obama approached the till, Mr. Webb, age 32, said, “Equal rights for gay people!” President Obama asked, “Are you gay?” Mr. Webb replied, “Only when I have sex.” The President laughed and said, “Bump me,” and the two men shared a fist bump. Mr. Webb said later, “That’s my favorite part because it was cool to get a joke in. In all the photos [all over the internet], I look like a dead fish, but it was cool. I do stand-up, so it was nice to have some interaction based on, hopefully, something funny. If Rick Perry [the governor of Texas] would’ve walked in, I would have lost my job. I would’ve taken that old queen to town.” Mr. Webb also said, “It was just a lucky day to be the register girl.” In addition, President Obama interacted with Amy Rattananinad, former Longhorn and Occupy UT organizer, who gave him a note that stated, “Stop Deportations.” Mr. Webb said, “They had kind of a real conversation, direct. You don’t just get face time with world leaders. I was impressed that he had a serious conversation with somebody in the middle of what would be a photo op.”

Check out the rest of https://davidbruceblog.wordpress.com/