Posted on September 13, 2015 by davidbruceblog 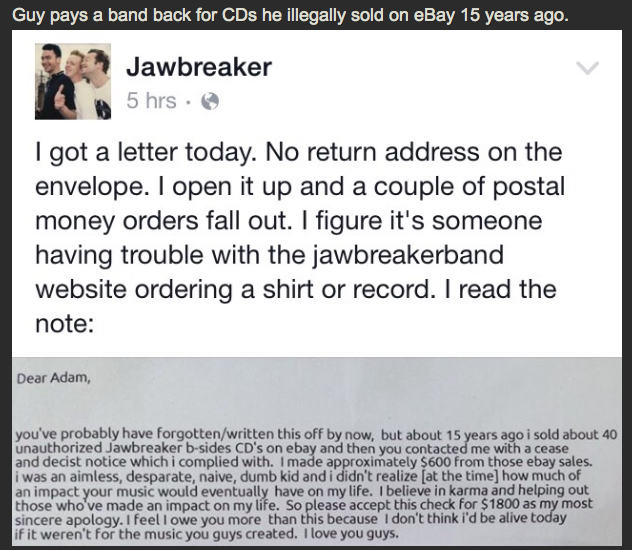 During August 2015, Redditor HollysaurusRex26 put on Imgur a post titled “Guy pays a band back for CDs he illegally sold on eBay 15 years ago.” The text from the band Jawbreaker stated, “I got a letter today. No return address on the envelope. I open it up and a couple of postal money orders fall out. I figure it’s someone having trouble with the jawbreakerband website ordering a shirt or record. I read the note: “Dear Adam, you’ve probably have forgotten/written this off by now, but about 15 years ago I sold about 40 unauthorized Jawbreaker b-sides CDs on ebay and then you contacted me with a cease and decist notice which I complied with. I made approximately $600 from those ebay sales. I was an aimless, desparate, naïve, dumb kid and I didn’t realize [at the time] how much of an impact your music would eventually have on my life. I believe in karma and helping out those who’ve made an impact on my life. So please accept this check for $1800 as my most sincere apology. I feel I owe you more than this because I don’t think I’d be alive today if it weren’t for the music you guys created. I love you guys.” On Reddit, treycook commented, “There are a lot of social workers in my life. Many of them have expressed that when people do bad things like this, it is generally an act of desperation and self-preservation, rather than an act of malice. You’ve gotta keep in mind that people are generally good, make mistakes, and don’t enjoy doing harm to others. When you are in a very unfavorable situation, you will manipulate things to your benefit in one way or another — that’s just how humans operate. Presumably this fellow was coping with the anguish of his actions for many years. I hope he is feeling better and will work to grant himself forgiveness now.”

HollysaurusRex26, “Guy pays a band back for CDs he illegally sold on eBay 15 years ago.” Imgur. August 2015

HollysaurusRex26, “Guy pays a band back for CDs he illegally sold on eBay 15 years ago.” Reddit. August 2015

Lots of Books by David Bruce (Some Free)