William Shakespeare’s “Timon of Athens”: A Retelling in Prose 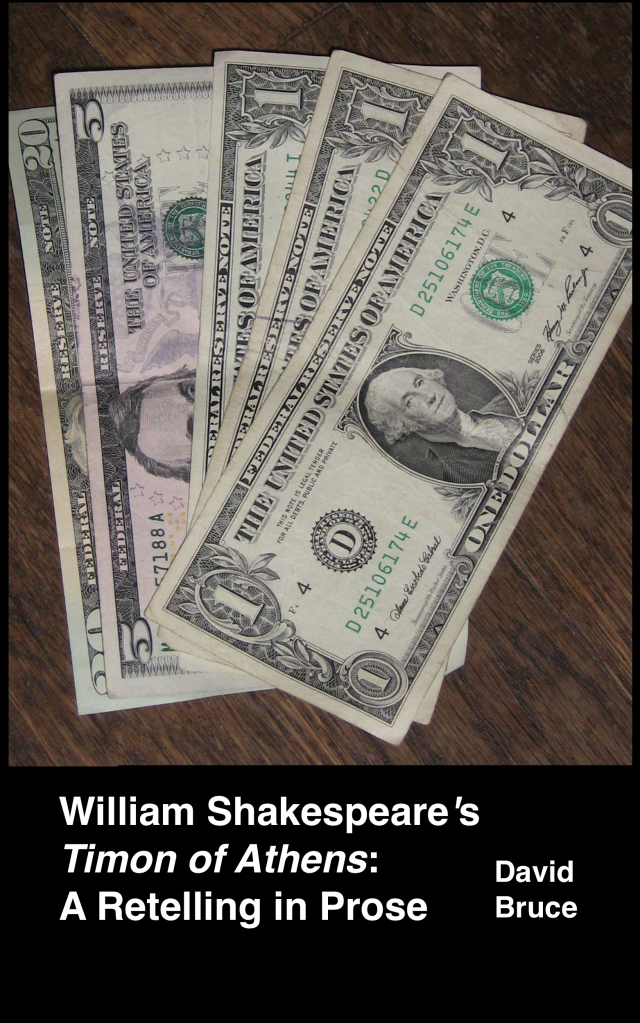 Below is an excerpt from my book William Shakespeare’s Timon of Athens: A Retelling in Prose, which sells for 99 cents — cheap! — at Smashwords, Apple iBookstore, Barnes and Noble, Amazon, etc. In this play, which I retell in novel form, Timon is a wealthy man who loses his money by being overly generous to “friends” who will not lend him money when he needs it. Here he meets two whores who are traveling with a man whom Timon knows. Timon has found gold while digging for edible roots, and he wishes to spend that money on doing as much harm to living beings as he can:

Phrynia and Timandra, the two whores, said, “Give us some gold, good Timon. Do you have more?”

“I have enough to make a whore forswear her trade and to become a bawd and make other women whores,” Timon said.

With the gold that Timon had, a whore could set herself up as the proprietor of a whorehouse and let other women do the whoring. No doubt Timon believed that if the new whores were recently sweet, young virgins, so much the better.

He continued, “Hold up, you sluts, your aprons mountant.”

He wanted the two whores to hold their aprons up so that they could catch the gold he threw to them. The aprons were mountant — always being lifted — because the whores would lift their dresses so the whores could be mounted and make money.

Timon continued, “You are not oathable, although, I know, you’ll swear, terribly swear into strong shudders and to Heavenly agues the immortal gods who hear you.”

The two whores were not oathable because although they were very willing to swear oaths to the gods, they could not be trusted to keep them. “Strong shudders” and “Heavenly agues” are characteristics of orgasms and of venereal diseases. An ague is a fever, sickness, or shaking caused by a fever.

Timon continued, “Spare your oaths, I’ll trust to your personal characters: Once a whore, always a whore. Be whores always. When you meet a man whose pious breath seeks to convert you, be strong in whoredom.”

In Ephesians 6:10 Saint Paul advises, “Finally, my brethren, be strong in the Lord, and in the power of his might.”

Timon continued, “Allure him, burn him up with lust and venereal disease. Let your enclosed fire dominate his smoke, and you two don’t be turncoats.”

An enclosed fire is a vagina. Smoke is the vapor of words not believed by the person who speaks them. Some people blow smoke up a place near an enclosed fire.

He continued, “Yet may your pain-sick mounts be quite contrary to your best interests, and thatch your poor thin roofs with burdens you get from the dead — including some who were hanged.”

Venereal disease was thought to cause baldness. The burdens of the dead referred to hair harvested from corpses and made into wigs.

Timon continued, “It doesn’t matter — wear the wigs, betray your customers with them by looking attractive so men will have sex with you. Always be a whore. Apply cosmetics to your face so thickly that a horse could sink in the mire on your face. May you have a plague of wrinkles you have to cover up with cosmetics!”

“Pain-sick mounts” referred to sexual mountings that caused the pain of venereal disease. However, Timon sometimes muttered, and he may have said, “pain-sick months,” which might be a reference to the months a whore could spend in prison, during which time she might acquire hair from corpses to use to make herself a wig and/or to sell in order to get money to buy cosmetics. However, the usual punishment for prostitution was a whipping.

Phrynia and Timandra said, “Well, give us more gold. What do you want us to do then? Believe that we’ll do anything for gold.”

Timon replied, “I want you to sow wasting venereal diseases in the bones of men and make them hollow. I want you to strike their sharp shins, and mar men’s spurring.”

The spurring referred to riding, both of horses and of whores.

He continued, “Crack the lawyer’s voice, so that he may never more plead a false legal case, nor sound his quibbles shrilly.

“Hoar — make white with disease — the priest, who scolds against the nature of flesh, and does not believe what he himself says.

“Down with the nose. Down with it flat. Take the bridge entirely away from the nose of the man who, hunting to provide for his particular, individual good, loses the scent of the general good.”

Venereal disease destroyed the bridge of the nose, thereby making the nose flat.

Timon continued, “Make curly-headed ruffians bald, and let the unscarred braggarts of the war derive some pain from you.”

Unscarred braggarts were cowards; in contrast to cowards, brave men who fought in battles tended to have scars.

He continued, “Plague all so that your activity may defeat and destroy the source of all erection.”

He threw more gold onto their laps and said, “There’s more gold. May you damn others, and let this damn you, and may all of you find your graves in ditches!”

Phrynia and Timandra said, “Give us more advice and more money, generous Timon.”

“More whore and more mischief first,” Timon said. “I have given you a down payment for what I want from you.”

This entry was posted in Uncategorized and tagged Shakespeare, Shameless Commerce. Bookmark the permalink.