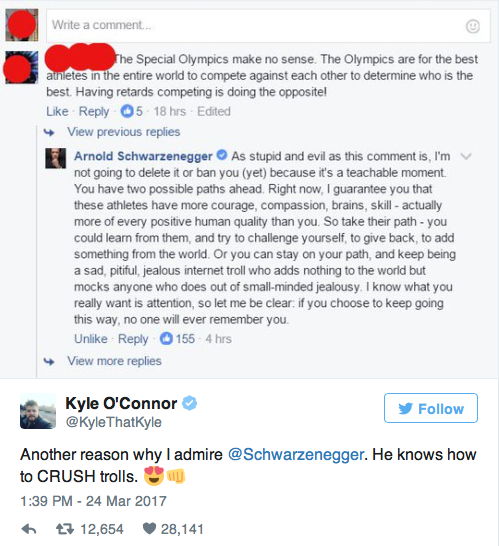 Arnold Schwarzenegger has been a huge advocate of the Special Olympics, especially since it was founded by his former mother-in-law. Over the last few days, the star of Predator and Terminator has been hanging out with the athletes in Austria.

Earlier this week, he joined the winning Irish ski team – who have to date won two gold, one silver and one bronze medal – on the winners podium to take a video with them. He also shared it to his Facebook page with the caption “These guys inspire me!”:

In a since deleted post (which someone on Reddit has screengrabbed here), Arnie absolutely destroyed an online troll who said “The Special Olympics make no sense. The Olympics are for the best athletes in the world to compete against each other.”

This keyboard warrior also used an incredibly offensive term for the athletes. After seeing this offensive post, Arnie was having none of it:

“As stupid and evil as this comment is, I’m not going to delete it or ban you (yet) because it’s a teachable moment. You have two possible paths ahead. Right now, I guarantee you that these athletes have more courage, compassion, brains, skill — actually more of every positive human quality than you. So take their path — you could learn from them, and try to challenge yourself, to give back, to add something from the world. Or you can stay on your path, and keep being a sad, pitiful, jealous internet troll who adds nothing to the world but mocks anyone who does out of small-minded jealousy.”

And then for the kicker: “I know what you really want is attention, so let me be clear. If you choose to keep going this way, no one will ever remember you.”

The exchange has since been deleted, but it just goes to show that even at 69 years old, Arnie can mic-drop better than anyone.

‘If you choose to keep going this way, no one will ever remember you.’

This entry was posted in Uncategorized and tagged Arnold Schwarzenegger, Special Olympics. Bookmark the permalink.