Posted on June 9, 2017 by davidbruceblog 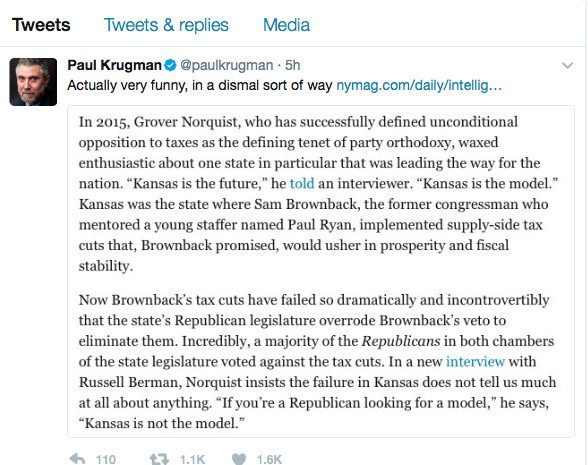 Now the machinery of government is in the hands of people determined to replicate a policy so unmistakably erroneous that the majority of their own party could no longer live with it.

We get to use our assets 100% free of charge,” [Eric] Trump tells Forbes. That’s not the case. In reviewing filings from the Eric Trump Foundation and other charities, it’s clear that the course wasn’t free–that the Trump Organization received payments for its use, part of more than $1.2 million that has no documented recipients past the Trump Organization. Golf charity experts say the listed expenses defy any reasonable cost justification for a one-day golf tournament.

While the new Kansas law doesn’t roll back all the elements of the tax plan, it eliminates most of them, including the most controversial one: the zero tax rate for owner-operated businesses. The change was intended to spur business investment and expansion, but instead, it created massive tax avoidance, according to researchers.

Nevada, with little fanfare or notice, is inching toward a massive health insurance expansion — one that would give the state’s 2.8 million residents access to a public health insurance option. The Nevada legislature passed a bill Friday that would allow anyone to buy into Medicaid, the public program that covers low-income Americans. It would be the first state to open the government-run program to all residents, regardless of their income or health status.

Jonathan Chait: Trump Can Commit All the High Crimes He Wants. Republicans Aren’t Going to Impeach Him. (New York Magazine)

To imagine Republicans might turn on Trump over the Russia scandal to the point of deposing him from office is to misunderstand how they have been thinking about Trump and the presidency all along.

This entry was posted in Politics and tagged Recommended Reading. Bookmark the permalink.